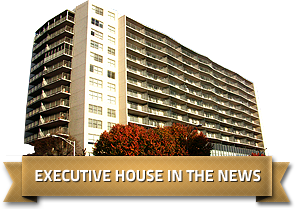 The Grand Opening of the New Executive House 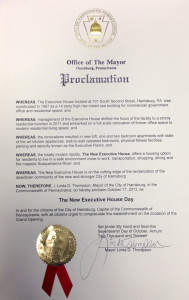 Harrisburg has seen a steady stream of luxury apartments and condominiums come online — a good sign for young professionals and others interested in expanded city living options. The Executive House is the latest to unveil new high-end residential stock on the city with the renovation of its first three floors. Its grand opening was last week. The 14-story high-rise at Second and Chestnut streets, which was built as a mixed-use property in the 1960s, was revamped to the tune of $4 million. That work included conversion of vacant government offices on the first three floors to 57 luxury apartments, as well as lobby and landscape work. Continue Reading >

Like in most cities, modernism began to take root after World War II, and today, it may be best expressed by Executive House, a 14-story high rise at S. 2nd and Chestnut streets. But even “modernist” buildings age and change. So, for more than a year, Executive House has undergone perhaps its most extensive update since its construction as a mixed-use building in 1967. “Executive House was one of the top buildings in the city when it was built,” said Regional Leasing Director Isaac Naon. “The way it was structured, the top floors were residential, and the first three floors were used as commercial space by the government. Within the past year and a half, the commercial space was vacated, and we decided to convert those floors into apartments.” Continue Reading >